Should Women Propose To Men In Nigeria? 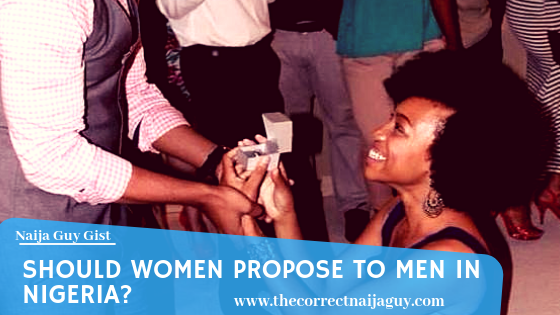 The proposal is always the debut of every marriage. Here, one party seeks the consent of the other party to spent the rest of their lives together. Afterwards, the wedding and the marriage proper.
Nigeria, being very cultural and also religious country, men are always the ones to propose to the women. The man being the head of the family has the sole responsibility to propose to a woman he finds fit to marry.
In the days of our fathers, the man always makes the first step. He gets his kinsmen and himself to see the father of the woman he intends to marry, seeks their consent and then fulfills every traditional rights. In modern times, things have remained the same, apart from the fact that Nigerian men have learnt to kneel and propose with rings.
In present days, especially with the social media trend, few Nigerian women have started proposing to men. Such occurrences are been displayed in social media today. Women defy the standards and propose to men publicly.
This has brought about conflicting opinions with majority from fellow Nigerian women who think it's a taboo while others hang on the ideology of feminism. Some women emphasize on the fact that men generally whose women propose to them, would never take the marriage serious. Adding that such men would not be ready to take up responsibility and may not value the woman. A fraction of women argue that such women make themselves vunarable and cheap.
On the other hand, Nigerian women who strongly believe in feminism state that "what a man can do, a woman can do better". To them, it's just normal. If the woman really like the man,  she can as well propose to the man.
"Should women propose to men in Nigeria? " Definitely everyone would answer this question based on their own experiences and their opinions. Here are some reasons why Nigerian women have started proposing to men. 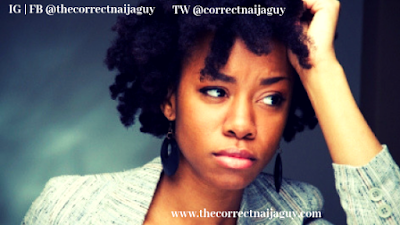 Most Nigerian women feel this pressure when most, if not all her friends are getting married and she has no one looking at her. She keeps on been the chief bridesmaid for all her friends but never gets to be the actual bride. This is quite frustrating to most Nigerian women and they feel this undue pressure to get married.
Pressure also comes from her family. In Nigeria when the lady is done with school and probably her youth service, her family may begin to mount pressure on her about getting married. She may hear statements like "your mates are getting married, give us grand children, we have tried for you". It even gets to a point where, her family members begin to arrange blind dates for her, some even gets suitors forced on them. She never gets peace at home because the marriage issue is always all she hears about. Here she feels she needs to take charge and get a knees to the ground and propose in order to be relieved from the pressure her family mounts on her. 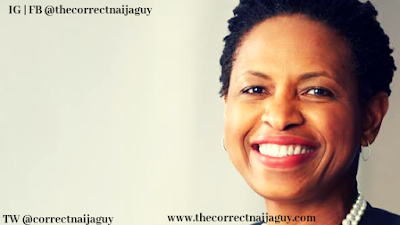 Getting to the late twenties can actually scare Nigerian women especially when no suitor comes around for their hand in marriage. The Nigerian woman feels that time is no longer on her side as menopause gradually approaches. She feels the earnest desire to get married as soon as possible and have her own kids before it gets too late. This definitely can make her decide to search for any suitable man and propose.

3) She sees the potential in him 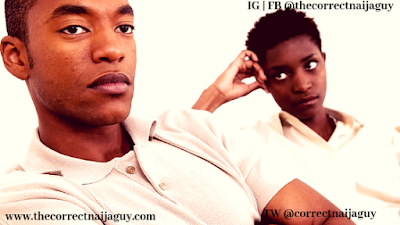 Some women have the ability to know a man who has values, vision, is a husband material and has the potential to be rich. This makes them willing to invest their all in terms of money and time on him. So there are not willing to let him slip out of their hands to a woman who would probably not value  him like they do. Proposing to him will make no big deal to them. They rather be mocked for doing that but would be satisfy to have him as a husband and be happy for the rest of their lives.

The issue of woman proposing to men can also come from the fact that some men can be so insensitive. She does everything possible to let her man know that it's time but he deliberately ignores. So she keeps trying or she leaves the relationship. Other women who can't let go, will swallow their pride and propose.
As a man, when she begins to ask you questions like "where is this relationship going? ", or talks a lot about marriage, you should know that she definitely wants you to do something as soon as possible. Give her the guarantee that the relationship is worth it.
There's definitely no concrete fact to support or oppose women proposing to men in Nigeria. All opinions are either drawn from beliefs where it's  states that "he who finds" not "she who finds" or traditional cultural ways that specifically assigns the duty to the man to propose.
"Should a woman propose to a man in Nigeria?" Tell us about your opinion by leaving a comment below. We would be glad to hear what you think about the topic.